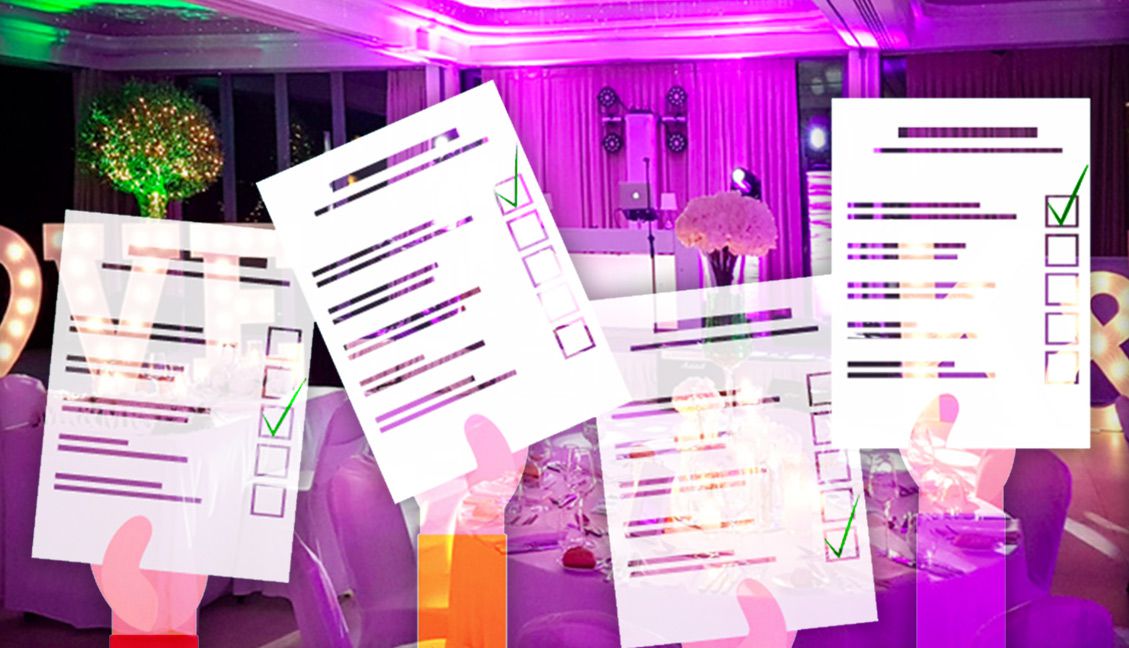 Previously, I’ve covered the importance of having great contracts for mobile gigs some key language and provisions in your contract to legally keep you and your client in check. If you didn’t read that yet, you can catch up here. In part 2, I’m diving into the next set of important literature you need to […]

from DJ TechTools djtechtools.com/2019/04/30/mobile-dj-tips-forms-that-will-help-make-gigs-easy/
via IFTTT

At last weekend’s “Resolution” SMACK/URLTV event in Atlanta, featuring the highly anticipated Cassidy vs. Goodz battle, the surprise announcement of the Tsu Surf vs. Geechi Gotti battle was unveiled live on stage. The battle is schedule to appear on the upcoming  NOME 9 event in Houston, Texas set for Saturday, June 8th.

Over the last few months, there has been a lot of back and forth between the two lyricists on whether this is a battle that needs to happen. The fans believe that the red-hot Geechi Gotti seems to have earned the shot at the legend Tsu Surf. On the flip side, many also believe it is Surf that needs to do a little more work to live up to the legend that is attributed to him… particularly after infamously not finishing his final round against Rum Nitty last year at NOME 8.

What is it about Surf that makes him larger than life?

At the top of 2019, he released his “Seven25” album to critical acclaim.  The 13-song offering helped solidify him as a bonafide commercial rapper, building upon his impressive high-profile radio freestyles on Hot97’s Funk Flex, Power 106, and I-95, various music videos and interviews. He is so much of a hot ticket, that he consistently racks in millions of views when ever he is recored. The experienced Newark, New Jersey MC has battled the likes of Hitman Holla, Conceited, T-Top, Tay Roc, Calicoe, Charlie Clips, Hollow Da Don, Shotgun Suge, Aye Verb, K-Shine and DNA amongst others over the last decade mainly on the SMACK/URLTV stage to great success. He counts Joe Budden as one of his closest friends. Most impressive and fueling the mythology behind The Wave, is his ability to bounce back after a short bid and being shot in his very-own hood. He is basically battle rap’s Tupac and an formidable opponent to any contender.

Check him out below:

But Geechi Gotti is nothing to sneeze at either.

Gotti is a relatively new comer to URL, but is already someone that leaves battlers shaking in their boots. If Surf is battle rap’s Tupac, Gotti would be the culture’s Ice Cube.  The Source has witnessed his growth. In 2017, he was rated 14 on our Top 20 Battle Rappers of the Year. The very next year, he skyrocketed up to #2 on our list. Another platform, CHAMPION w/ Jayblac voted him as #1 of the year.

No matter the platform, he is widely regarded as one of the most exciting new faces to hit the main stage in recent years. Gotti came up through the ranks of several regional battle leagues over the last 5+ years ago on the West Coast. But it cannot be disputed that his toughest contest has been on the URL stage.

With tough bouts against battlers such as K-Shine, Rum Nitty, JC, A.Ward and Ave, the battled conditioned and in-form Geechi Gotti is sure to bring full three rounds for a Tsu, who is now teetering on mainstream music success after a whirlwind year. Much more than just an East vs. West battle on neutral territory, the match-up promises to be a tough encounter for both. Both Crips will clash for what is sure to be bombastic!

The NOME 9 event features the previously announced blockbuster match-up of Loaded Lux vs. Aye Verb, widely considered as one of the best potential battles of the last decade with a long history in itself. Representing Loaded Lux’s highly anticipated return to the all-important SMACK/URLTV stage, since he last battled Charlie Clips in 2015 at Summer Madness 5.

NOME 9 is shaping up to be the battle rap event of the year among increasingly stiff competition. Stay tuned.

The post Geechi Gotti Finally Gets A Shot At The Wave! Tsu Surf Accepts Challenge appeared first on The Source.

from PC Gamer www.pcgamer.com/steams-golden-week-sale-offers-deep-discounts-on-japanese-games
via IFTTT

Inside this Mobile Beat you’ll find a bunch of ideas for adjusting your perspective on a variety of DJ issues. We hit on tech misconceptions, the sync button controversy, “sacred cows” and more. So crack open this MB for a DJ reality check!

from Mobile Beat For DJs www.mobilebeat.com/mobile-beat-205-april-2019/
via IFTTT

One of the first Amlogic S922X TV box to show up in our news feed was Beelink GT1-K “King” with 4GB LPDDR4, 64GB eMMC flash, and all interfaces and features you’d expect from a…

It’s easy to focus on the positives and tune out the negatives of cannabis legalization when, in more places than ever, you can walk into a storefront and conveniently purchase a pre-roll without fear of being arrested.

So, it makes sense that when brands like Ben and Jerry’s make statements about racial injustice or documentaries like Grass is Greener — appropriately released on 420 — make their way onto Netflix, they tend to disrupt the dominant narrative that everything is pretty much cool now.

This smart documentary, directed by the hip hop pioneer Fred Brathwaite who’s better known as Fab 5 Freddy, illuminates the deeply interwoven relationship between jazz, hip hop, reggae and cannabis. From Duke Ellington and Louis Armstrong to Bob Marley and Peter Tosh to Snoop Dogg and Cypress Hill, viewers are given a chance to connect the dots between cannabis and black music across eras and genres. All the while, Brathwaite narrates through the history of the parallels between the music, the artists and the plant that all found themselves at odds the status quo of their time.

The documentary lends screen time to musicians, researchers, artists, policy-makers, activists and others to speak on what they’ve learned about cannabis and music, their hopes and fears for the burgeoning industry and how cannabis prohibition has affected them personally or the people in their lives. Brathwaite acts as interviewer and guide as he paints a picture of a global counterculture of black artists who exert major, inexorable influence on cannabis culture, both then and now.

This influence is plainly visible from a slang perspective: Words like weed, chronic and ganja all find their roots in this community.

But it does go deeper than that.

The impact and influence of the music are juxtaposed with the reality that — whether in the depths of New Orleans during the height of the jazz era or decades later in the Bronx during the dawn of hip hop — the government found a way to systematically punish being black through cannabis prohibition. For those who are not aware of how blatant racism (masked as cultural anxiety) fueled the War on Drugs, this documentary will help to shed some light on how the politicization of cannabis and its association with people of color (particularly black and Latin people) created a stigma that still remains to this day.

And for industry workers who turn a blind eye to the fact that people of color have been routinely sidelined from participating, this documentary could shed light on how their silence contributes to the problem. And it might just bring the casual user around to the idea that the local weed man on the so-called “black market” is just as much of an entrepreneur as the clean-cut guy tabling at the cannabis convention.

Some parts of the documentary are understandably heavy and heartbreaking, but this feels necessary rather than gratuitous. “Grass is Greener” speaks to a bigger need, beyond just discussion — it demonstrates that real action is essential to fix a history that has unapologetically criminalized a plant and a people under the guise of safety.

The truth is, none of the facts in the documentary are new information. But they are important, and they retain profound impact on how the legal cannabis system is functioning, yet still failing to support its most vulnerable participants. Because it unabashedly addresses a topic so many politicians, uneducated physicians and successful cannabis professionals and ignore with the finesse and ease of well-written track, it’s a gem worth watching and worthy of respect.

TELL US, have you watched “Grass is Greener” yet?

from Cannabis Now cannabisnow.com/review-grass-is-greener/
via IFTTT

Nipsey Hussle was an active father in his daughter Emani’s life prior to his passing, and his family is taking strides to make sure she stays close. The late rapper’s sister, Samantha Smith, reportedly filed for custody of the 7-year-old.

TMZ reports that Smith filed a request with the Los Angeles County Court to grant her full guardianship. Sources say Hussle was her primary caregiver until he was fatally shot and her biological mother is unable to care for her.

Samantha reportedly assisted in the care of Emani throughout her life and wants “to ensure the continued stability for Emani and ensure that she will be able to maintain her current and ongoing relationship” with Nipsey’s family.

Other sources reported that Emani’s birth mom, Chyna, didn’t even know Samantha filed for guardianship. The judge has yet to come to a decision.

The post Nipsey Hussle’s Sister Reportedly Files for Guardianship of her Niece Emani appeared first on The Source.

from The Source thesource.com/2019/04/30/nipsey-hussle-emani/
via IFTTT

from Synthtopia www.synthtopia.com/content/2019/04/30/a-beginners-guide-to-cassette-tape-machines-for-music-production/
via IFTTT

from PC Gamer www.pcgamer.com/oculus-rift-s-review
via IFTTT

The door is still open for his return.

from HipHopDX News hiphopdx.com/news/id.51234/title.empire-renewed-for-season-6-without-jussie-smollett-for-now
via IFTTT