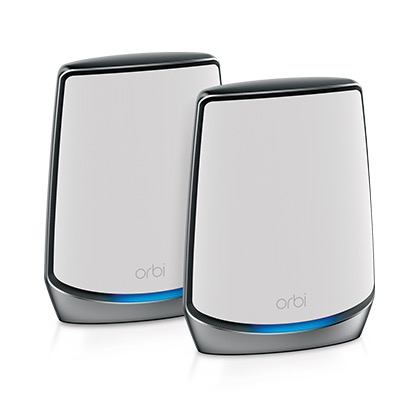 For those unfamiliar with Orbi, it is a multi-node mesh Wi-Fi system, some models of which Apple sells in its retail stores. The idea behind a mesh system is to provide multiple access points throughout the home, ensuring high-speed Wi-Fi coverage in all rooms.

And with Wi-Fi 6, aka 802.11ax, the Orbi WiFi 6 System AX6000 (RBK852) promises faster speeds than any other mesh router, as well as greater network capacity, improved power efficiency, lower latency, and connectivity improvements.

The upcoming iPhone 11, iPhone 11 Pro, and iPhone 11 Pro Max all support the latest version of the Wi-Fi protocol, so the Orbi WiFi 6 System will also serve Apple’s latest smartphones.

The Orbi AX6000 (RBK852) includes a Wi-Fi router and one satellite, and is designed to cover large homes up to 5,000 square feet. It packs 4×4 radios, 2.4Ghz/5Ghz fronthaul with support for up to 100 devices, and 5GHz backhaul (for connecting individual mesh routers and creating one large Wi-Fi network).

The system offers speeds and bandwidth capable of 4K/8K streaming and online gaming to multiple screens simultaneously without interruption. However, that capability comes at a significant price: The Orbi WiFi 6 System costs no less than $699. Pre-orders are open now on the Netgear website.

from MacRumors: Mac News and Rumors – All Stories www.macrumors.com/2019/09/19/netgear-orbi-wi-fi-6-mesh-router-available/
via IFTTT